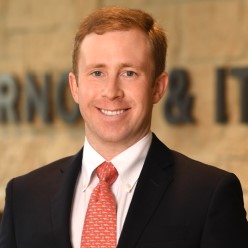 John Grinnan is a trial lawyer who never backs down unless his clients get the best results possible. He came to Arnold & Itkin in 2021 with nearly a decade of experience standing up to the world’s largest companies on behalf of individuals harmed by their negligence. His legal work focuses on wrongful death and catastrophic injuries.

John grew up in Dallas, where he attended Jesuit College Preparatory School. His undergraduate studies took him to Austin to study government at the University of Texas. He then continued his studies at the South Texas College of Law.

While in law school, John developed his passion for trial advocacy while participating in the school’s nationally-ranked moot court program. There, he was privileged to learn from the late Thomas Gerald Treece.

John’s academic performance earned two awards, including one for finishing with the highest grade in the school’s Advanced Products Liability Course. He was also included on the Dean’s List for four consecutive semesters.

After being admitted to the State Bar of Texas, John immediately began his trial work. He spent nearly a decade taking on some of the largest companies to make sure they answered for harming regular people. This experience helped make John a great fit at Arnold & Itkin.

When he isn’t working, John can be found with his wife Sarah and his daughter Clare. He also golfs and loves to support his favorite football, basketball, and baseball teams.

Attorneys Adam Lewis and John Grinnan represented an interstate driver from Texas who worked nationwide. Our client had been driving in rural Ohio when he was involved in a truck-on-truck accident after a different rig exited its lane and collided with his own. Following the side-swipe accident, our client was taken to the hospital, where he spent three days before being allowed to return home to Richmond, Texas. Our client sustained both spinal injuries as well as a mild traumatic brain injury that required extensive conservative treatment. The injuries made it so that he would never be able to return to gainful employment.

Our firm took on the case, filing suit in Wayne County, Michigan where the defendant trucking company is based. We aggressively litigated the case, taking more than nine depositions, but the defendants only offered $150,000 leading up to trial. The defendants then attempted to blame the weather for the accident and accused our client of magnifying the extent of his injuries. After a two and a half week trial, the jury deliberated for two days and returned with a verdict in excess of $5.5 million. Non-economic damages were broken into $340,560 (past) and $4,133,400 (future). Economic damages were broken into $273,000 (past) and $819,000 (future).

Attorneys Kurt Arnold, Kyle Findley, and John Grinnan secured $2.75 million for the assistant supervisor of a jack-up rig. Our client was working overseas when he became a victim of the people in charge of the vessel, who insisted on using dangerous methods for equipment removal to save time. Their corner-cutting caused our client to suffer spinal injuries that required surgery. Our experience with drilling vessels and how they’re managed allowed us to uncover what happened, which compelled the defendant to offer our client what he needed.

Attorneys Kurt Arnold, Kyle Findley, and John Grinnan represented a warehouse worker injured when heavy furniture fell off a forklift from over 20 feet off the ground and struck him. During our process, we discovered evidence that the forklift operator had never been trained or licensed; as a result, the heavy furniture was not appropriately secured. We took on the case and were proud to reach a $2.3 million settlement.