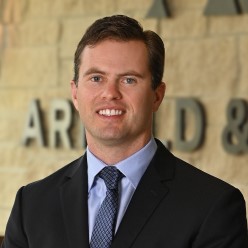 Alec Paradowski is a born and raised Texan. Growing up in College Station as the son of a personal injury lawyer, he ventured to South Carolina for his undergraduate degree at Wofford College, only to return to Texas to earn his master’s degree at Texas A&M University. Throughout this time, he was heavily involved in baseball; he played on the team at Wofford College all four years, then worked with the 2017 Aggie baseball team at Texas A&M, which reached the College World Series.

Upon graduation from Texas A&M University, Alec came to Houston, where he worked for a year and a half before attending law school at the University of Texas. In law school, Alec competed in interscholastic mock trial competitions and was a member of the Texas Journal of Oil, Gas, & Energy Law.

Alec was inspired to pursue law because of his father’s work as a personal injury lawyer. He saw firsthand the importance of helping those who had been injured, and he brings that passion to his clients at Arnold & Itkin today.

When he’s not working, Alec enjoys spending time with his fiancée, Kylie, and playing golf. The two attend Our Lady of Walsingham Catholic Church.

Attorneys Kurt Arnold, Caj Boatright, Roland Christensen, and Alec Paradowski represented a man injured while working offshore. Our client was struck in the head and face by a heavy cable that had been secured with a tattered rope; it broke free and hit our client. We fought hard and reached a $2.5 million settlement.