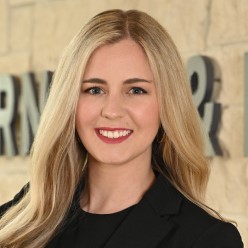 Ali Poulson grew up in a small town in Northern Utah after moving to America at the age of three. It was there that she held her first job: cleaning the facilities at her dad’s manufacturing shop. This background helps her personally understand how important it is to uphold workplace safety to make sure all workers go home to their families.

Ali started her college career studying theatre at the University of Utah. She amassed several achievements including making the Dean’s List and acquiring a Department of Theatre Scholarship. At the end of her undergraduate education, however, she felt an indescribable pull toward the legal field, calling her to apply to law school.

Unlike many lawyers, Ali is the first in her family to not only become a lawyer but also to receive a doctorate degree. Not only was she extremely involved in clubs and service groups during law school, but she also held several leadership positions and externed for The Honorable Paige Petersen on the Supreme Court of Utah. She was also an Associate Editor on the BYU Law Review and served on the BYU Law Review Editorial Board as the Managing Editor of Publication. For her many acts of service, Ali received the Wendy C. Archibald Meritorious Service Award upon graduation.

Throughout her time in law school, Ali realized her passion for litigation, and she quickly became one of her school’s top trial competitors. In her second year, her team was the Regional Champion of the Texas Young Lawyers’ Association Trial Competition and continued on to become a National Semi-Finalist at the National Trial Competition. A first in BYU’s history, as a third-year law student, her team was invited to participate in the Tournament of Champions thanks to their success the previous year. Ali also received a National Institute of Trial Advocacy Certification.

Ali’s career with Arnold & Itkin began as a law clerk during her last semester in law school. Upon passing the bar exam, she continued to work in Utah and soon moved to Houston to take on her dream job as a Trial Attorney.

Today, Ali puts her passion into her work as she always has, fighting tirelessly for people all over the country who have suffered life-changing injuries.

Living her life with a “work hard, play hard” approach, Ali loves to spend time cooking with her husband, Jon, and taking their dog on walks together.