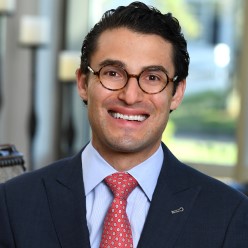 Andrew Gould brings years of skilled appellate advocacy to Arnold & Itkin. He traces the origins of his legal career to his hometown of Louisville, Kentucky. Here, his parents taught him to love reading, writing, and debating.

He developed his passions as an undergraduate student at the University of Michigan, graduating with honors and winning the Arthur Fondiler Award for best history thesis. He then continued his education at Vanderbilt University, graduating Order of the Coif.

During his time at law school, Andrew sharpened his writing skills by serving as the executive editor of the Vanderbilt Law Review. He also published a note on the Second Amendment, a work that was recognized as the most outstanding student writing with the Morgan Prize. Andrew has continued his work with the Vanderbilt Law Review by serving on its Alumni Advisory Committee since 2014.

Andrew started his legal career by clerking for two federal judges. First, he worked under the Honorable Raymond M. Kethledge of the U.S. Court of Appeals for the Sixth Circuit. Then, he worked under the Honorable Lee H. Rosenthal of the U.S. District Court for the Southern District of Texas. Working with these judges helped Andrew improve his legal writing and provided him with first-hand experience with how judges handle cases at the trial and appellate stages.

After working as a clerk, Andrew took his experience to Washington D.C. and worked for a large corporate law firm. Here, he worked on complex cases at the trial and appellate stages.

After working in Washington D.C., Andrew headed back to Houston in 2014 and joined the U.S. Attorney’s Office for the Southern District of Texas. Here, he worked in the office’s appellate division, serving as lead counsel on approximately 140 appeals. Andrew’s time here also found him arguing in front of the U.S. Court of Appeals for the Fifth Circuit 20 times. Since trial prosecutors called on him multiple times to assist with difficult cases, Andrew was able to gain valuable experience at the federal district court level. His work earned awards at the trial, appeal, and post-conviction stages.

In 2021, Andrew was approached by Arnold & Itkin to create an appellate section unlike any in the nation. Andrew was excited by the opportunity to give regular people the strong appellate assistance that large companies enjoy and knew it was the right job for him.

As a member of AI, Andrew is excited to secure justice for people suffering because of the reckless behavior of others. He’s always ready to protect the future of clients by fighting for the results that they deserve, no matter what. Whether someone needs help during a trial or at appeal, Andrew won’t back down until they’re treated right.

As an active member of the Houston legal community, Andrew is constantly interacting with the city’s incredible bench and bar members. He serves as Vice President of the Federal Bar Association’s Southern District of Texas Chapter, where he helps lead the chapter’s programming. Additionally, he’s a member of the Garland Walker American Inn of Court, Houston Bar Association, and the State Bar of Texas’s Appellate Section.

When he isn’t helping a client, Andrew is cooking, running, sinning, watching college sports, or chasing one of his two sons. He and his wife Rebecca are also proud supporters of Rice University and the Houston Symphony.