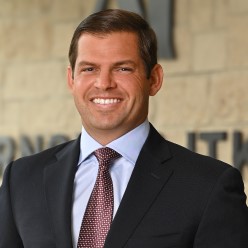 As a trial lawyer with Arnold & Itkin, Samuel Long fights to win for his maritime and offshore clients no matter what. With a long history of service and sacrifice, he brings a commitment to his work that fits in perfectly with our firm’s DNA.

Growing up in Newnan, Georgia with three brothers and two sisters who are all military veterans, Sam was nearly destined to join the U.S. Marine Corps. After attending the U.S. Naval Academy, where he played Division I baseball and graduated with honors, he was commissioned in the U.S. Marine Corps in 2011. Starting as an infantry officer, he spent the next five years leading two rifle platoons in combat and humanitarian assistance operations before being assigned to recruiting duty.

Sam’s experience in the Marine Corps inspired his desire to go to law school. He knew he wanted to become a trial lawyer and so he spent the majority of his free time in school preparing: he has worked with Arnold & Itkin during the summers since 2018 and spent his last semester working as a full-time law clerk in the Harris County Civil District Courts.

During law school, Sam also served as an editor of the Virginia Tax Review and as the President of Virginia Law Families. He was selected as a 202 Pat Tillman Scholar based on his military achievements and commitment to service throughout his career. On top of everything he has achieved, Sam is an Eagle Scout, black belt, violinist, and father of two boys.

Outside of work, Sam enjoys spending time with his wife and two sons, living in Houston as active members of Second Baptist Church.