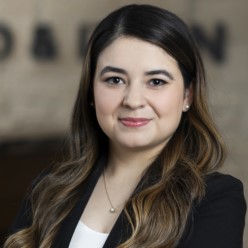 Amanda Rodriguez sees her clients as family—and that makes her fight even harder. When people have everything on the line, when they need to win, Amanda is the attorney they need. She refuses to be outworked because she takes their cases personally, putting as much time and effort as necessary to get the best results.

Amanda discovered she wanted to have a legal career at a young age. Growing up in the border town of Laredo, TX, her interest in law was fostered as she watched her family members' commitment to the community.

Amanda attended Texas A&M International University, where she obtained a Bachelor of Arts in English and Political Science. During her time at Texas A&M, Amanda participated in Harvard Model United Nations conferences. She also won a national title with the International Public Debate Association.

After being accepted at the Georgetown University Law Center, Amanda started to make her dream of becoming a lawyer a reality. At Georgetown, Amanda worked as an assistant editor for the Georgetown Technology Law Review. As a member of Georgetown's Institute for Public Representation, she worked on civil rights cases that included employment and gender discrimination issues. This experience sparked Amanda's passion for helping clients who've suffered from injustice.

Amanda wasted no time earning legal experience in the nation's capital. She interned as a law clerk at the U.S. House of Representatives. She also worked with Washington's inner-city youth with Georgetown's Street Law program. With this program, Amanda had the opportunity to teach constitutional law to high school students and helped them compete in a mock trial tournament.

Amanda started her legal career at the Charities' of Galveston-Houston's St. Frances Cabrini Center for Immigrant Legal Assistance. Here, she served as a Georgetown Law Fellow and represented indigent clients during immigration proceedings before the Executive Office of Immigration Review and the United States and Citizenship Immigration Services. Her time at Cabrini allowed her to assist dozens of unaccompanied children who were trafficked to the United States or were seeking asylum.

If Amanda isn't working on a client's case, she can be found volunteering with Catholic Charities. She's also a member of the Mexican-American Bar Association of Houston and is a native Spanish speaker. Outside of the legal world, Amanda loves to jog, cook, and spend time with family.