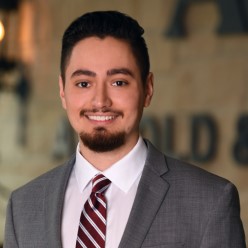 After growing up in Minneapolis, Minnesota, Alec studied at Iowa State University. Here, he was consistently on the Dean’s List. As he studied, it became clear to Alec that he could help the most people with his career by becoming a lawyer. So, after graduating from Iowa State, he moved back to Minnesota to earn his law degree at the University of Minnesota Law School.

Alec excelled in law school, receiving the Dean’s Elite Scholarship and making the Dean’s List just as he did during his undergraduate days. He strengthened his legal writing and advocacy skills while serving as an editor for the Minnesota Journal of International Law.

Alec also gained experience by working as a student attorney with the Business Law Clinic during his third year of law school. This work gave him the opportunity to work in small businesses, nonprofits, and entrepreneurs throughout Minneapolis.

After graduating from law school, Alec started clerking for a Minnesota trial court judge. Working as a clerk for a trial judge meant that Alec was exposed to all types of legal practice. Through this exposure, Alec decided one of the best ways to help others was by focusing on personal injury litigation.

At Arnold & Itkin, Alec is thrilled to have the opportunity to help regular people facing seemingly impossible odds. He refuses to back down from a challenge because he understands that he has the ability to secure life-altering results for the people he works with.

When he isn’t helping clients, Alec can be found snowboarding and hiking in Utah. He also loves to read, play piano, and cheer for Minnesota and Iowa State teams.