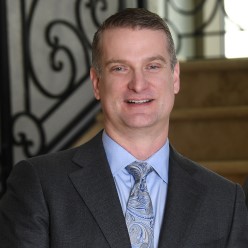 Before he was a lawyer, Matt McCune spent nearly his entire life in Omaha. He was born and raised in Omaha, earned his undergraduate in Omaha, and started his career and family in Omaha. At the University of Nebraska, he studied marketing and management, getting named to the Dean’s List multiple times for academic excellence. After college, he went to work for a national investment firm in Omaha, where he built a decade-long career in financial services. Meanwhile, he and his wife Liz started a family.

But even with an established career and a family, Matt wanted more. He wanted to make a significant impact in other people’s lives with his work, and for that, he’d need to go back to school. So, with the support of Liz and their five children, they moved to Utah so Matt could attend law school at Brigham Young University.

In law school, Matt excelled at oral advocacy and mock trial competitions, where he finished as a champion, finalist, or semifinalist every time. He also served as president or vice president in multiple student organizations, and also served as a teaching assistant for the first-year legal research and writing class. Off-campus, Matt gained valuable insight by working for two Utah judges, an injury firm, and a district attorney.

After earning his law degree, Matt joined a business litigation and intellectual property firm in Utah. His practice handled complex commercial litigation, complex injury litigation, real property litigation, and business transactions. The highlight of his career at the time was representing multiple counties in Utah and Idaho against large opioid manufactures and distributors for their role in causing the opioid crisis. At last, Matt was doing work that was changing people’s lives.

Still, the best was yet to come. After five years accruing vast experience in trial law, complex litigation, and taking cases to verdict or (when appropriate) settlement, Matt joined Arnold & Itkin. As the premier advocate for injured people nationwide, our firm gave Matt the best possible opportunity to serve others and change their lives under the worst circumstances they’ve ever faced. As an advocate, he provides his clients with unwavering support. He does whatever it takes to help them recover, no matter what.

In his spare time, Matt enjoys spending time with Liz and their kids taking road trips, playing music, and snowboarding “the greatest snow on earth” in the Utah mountains.