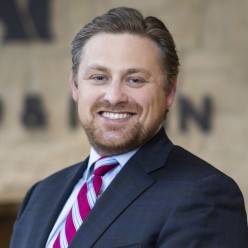 Ryan MacLeod has lived in the state of Texas his entire life. Originally from the town of Lubbock, Ryan was raised in Houston. His understanding of and belief in small, hometown principles is paired with the experience and savvy of being raised in a big city. Ryan has a passion for justice and for protecting the rights of his clients.

Ryan received his undergraduate degree at Baylor University before going on to pursue his J.R. at South Texas College of Law. His career took off quickly as he was given the privilege of serving as an Assistant District Attorney for the State of Texas. This work as a prosecutor gave Ryan unique insight into the criminal justice system. Ryan was able to try multiple criminal trials to verdict, including cases involving both misdemeanor and felony charges. He received praise from his peers in the legal field and from judges for his obvious passion, commitment to integrity, and aggressive approach to the law.

Ryan went on to work in the litigation section of a recognized national law firm. He represented plaintiffs and defenses in a broad range of civil litigation cases in this capacity. His track record quickly led to recognition within the community: He was named a 2015 Top Commercial Litigator by Houstonia magazine and recognized as a The National Trial Lawyers: Top 40 under 40.

After joining Arnold & Itkin, Ryan continues to work hard to promote his clients’ rights and interests. His approach to client advocacy is passionate and tireless, as he continues to stand up for the rights of those who sustained injuries due to the negligence or misconduct of others.

Ryan is licensed to practice law in the state of Texas, as well as:

In a recent confidential case, Arnold & Itkin took on some of the largest corporations in the world to secure justice for our clients. Attorneys Jason Itkin, Kurt Arnold, and Ryan Macleod were ready for trial when the opposition folded under the weight of evidence our firm procured. The result? A $97 million settlement for workers who were injured in a refinery fire. Due to our efforts, the injured workers will be able to get the medical attention they need—in addition to a financial future for their families.

An Arnold & Itkin attorney team consisting of Jason Itkin, Kurt Arnold, and Ryan MacLeod obtained an $87 million settlement for a refinery worker who sustained life-changing burns at the beginning of his young career. Arnold & Itkin was able to fight the companies’ claims that our client was responsible for his own wounds—and in the end— the responsible parties took ownership of their negligence and compensated the worker. This payment will assist the client and his family by giving him access to the best possible medical care. The team hopes that this settlement makes other corporations consider their options before endangering their employees.

Attorneys Jason Itkin, Cory Itkin, and Kurt Arnold were able to win a massive $72 million victory for our client after less than 2 years of preparation and investigation. Our client, a former oilfield worker, lost his arm and suffered other life-changing injuries in an accident caused by negligence. The companies responsible chose to settle with our client a week before trial was set to begin—giving him the financial security and access to medical care he needs. The settlement is potentially a record-setting size, which has compelled the companies involved to change their policies and ensure this never happens to another worker.

Attorney Cory Itkin aggressively pursued justice for our client, who was left severely and permanently injured as a result of an accident on the job. Our client was a truck driver and was unloading his cargo when he suffered a stroke. As a result, the cargo he was unloading fell on him, injuring him further. The defendants attempted to blame his injuries on being overweight or on unloading the cargo improperly, but Cory quickly rebutted their arguments. Our thorough trial preparation pressured them into settling with our client for $12 million—a massive sum that will go toward the constant care he now requires for basic daily tasks.
Attorney's fees and expenses totaled $5,102,160.96.

After a tragic fire that took the life of an individual, a family hired Attorneys Jason Itkin & Noah Wexler from Arnold & Itkin. This was the right decision because the firm obtained a major recovery on the client’s behalf, despite the defendants raising legal and factual defenses. The case closed when the defendants offered compensation on the eve of trial.

Attorneys Ryan MacLeod, Cory Itkin, and Jason Itkin represented a seaman from Rome, Georgia who suffered back injuries while trying to catch a falling drawer. The injuries ultimately required to surgeries. We discovered that the drawer had lacked a drawer stop, which is what caused it to fall after our client opened it. Our client had been onboard a pipe-laying vessel that had been docked in Mississippi at the time of the incident.

While working offshore near Brazil’s coast, our client was ordered to perform a strenuous task without adequate help. In following these orders, he sustained serious spinal cord injuries that left him unable to continue working in the offshore industry and required that he pay for extensive medical treatment, including surgery. Attorneys Jason Itkin, Noah Wexler, and Ryan MacLeod obtained a multi-million dollar settlement for this offshore worker to ensure he receives the medical care he needs and can plan for the future.

Attorneys Kurt Arnold, Kyle Findley, Ryan MacLeod, Kala Sellers, and Adam Lewis obtained a $2.5 million settlement on behalf of a Jones Act worker who was injured during a pipe transfer. Our client was facilitating a pipe transfer between a supply ship and a drilling vessel in the Gulf of Mexico when other workers walked off the job before it was complete. The heavy pipe load began spinning while our client held the tagline, injuring this back and his neck. His injuries required the treatment of multiple specialists and eventually surgery. Our firm built a case that showed the other workers were at fault for deviating from safety procedures. The defendant settled with our client shortly after trial began. The case was pending in Fort Bend County.

A man sustained serious injuries when he hurt his back as he was escaping from a burning building. He hired Arnold & Itkin to represent his claim. Attorneys Jason Itkin and Ryan MacLeod were able to obtain a $2.15 million settlement. As a result, this man will be able to pay for any future medical charges that come from this case and his family will be financially supported.

Attorneys Ryan MacLeod and Cory Itkin represented an oil and gas worker who had been injured while on the job. The defendants argued that our client and other parties were responsible for the injuries. We beat back these claims and were able to reach a $2.1 million settlement. The case was pending in a Texas Court.

Attorneys Jason Itkin and Ryan MacLeod helped a refinery worker who had been injured while on the job. Our team was able to secure a $2 million settlement for his case despite the company’s claims that the injury was “not serious.”

A refinery worker was doing his job when his back was severely injured. His employer encouraged him to tell no one about the injury and refused to attend to his wounds. That’s when he turned to us for help. Attorneys Jason Itkin and Ryan MacLeod listened to his story and represented him against the company. In the end, our representation secured our client a $2 million settlement. This money will ensure that he gets the best medical care available.

Arnold & Itkin filed a lawsuit on behalf of a family who had lost a loved one when he collapsed from a cardiac arrhythmia at the UPS warehouse where he was working that summer. The warehouse was not air conditioned. UPS argued that its warehouses rarely are. They further argued that the young man had needed his pacemaker since infancy and was well aware of the working conditions, having worked at that warehouse for the last six years. UPS had previously offered the family a $150,000 settlement before the case went to trial in Harris County, Texas. It takes a unanimous verdict to find a defendant guilty of gross negligence, which goes beyond ordinary negligence. Attorneys Cory Itkin and Ryan MacLeod secured this unanimous verdict to hold UPS accountable for its dangerous working conditions and to recover $1.5 million in compensation for the family.
Attorney's fees and expenses totaled $0.00.

Attorneys Cory Itkin and Ryan MacLeod represented a dock operator who suffered serious injuries after a barge collided with a dock; his injuries ultimately required neck surgery. Despite this, the tugboat company claimed that there was minimal impact from the collision and our client could not have been injured. They pointed to the fact that our client continued to work for nearly a year post-accident and that he had been involved in a vehicle accident the day before the collision. Our firm still emerged victorious, reaching a favorable settlement.

Attorneys Jason Itkin, Cory Itkin, Noah Wexler, and Ryan MacLeod represented a deckhand who was injured after being directed to check a hatch. The hatch that he had opened was under pressure, which threw our client back and to the deck. He suffered severe injuries to his back and neck as a result that required extensive medical treatment. The defendants contested their liability, blaming our client for opening the wrong hatch. Despite these allegations, our attorneys were able to negotiate a fair settlement of $675,000. The case was pending in Harris County District Court.