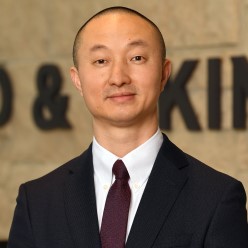 Born in a small town in southern China, RunZhi Lai left home at 17 to attend college hundreds of miles from home in Wuhan. From there, RunZhi enrolled at Texas A&M to earn a Ph.D. in microbiology. It was in Texas that RunZhi had an experience that taught him how impactful the law could be on a person’s life. After earning his Ph.D., he pursued a career in law at the University of Michigan Law School.

At law school, RunZhi competed in moot court, where he excelled. He also served as a student attorney for an environmental law clinic, building experience as a litigator. It was here that he first developed his passion for client advocacy. He spent one of his summers as an associate at one of the largest law firms in Texas.

Once he earned his law degree, RunZhi worked in biotechnology, co-authoring numerous research papers and book chapters. He then put his law degree to work, joining a law firm in Michigan for two years protecting intangible assets for individuals and corporations. His vigorous defense of his clients afforded him a strong reputation as an advocate, which is what led him to Arnold & Itkin.

RunZhi says that he has pursued the American Dream—a meaningful life built through perseverance and hard work—with 100 percent intensity. He sees the same intensity in his colleagues at Arnold & Itkin. The firm’s absolute commitment to each client’s well-being aligns with RunZhi’s, making him an excellent addition to our firm’s team. He’s thrilled to join Arnold & Itkin, bringing his experience and dedication to clients who have been harmed by wrongdoing.

When he’s not preparing a case, RunZhi skis, hikes, and camps with his wife in the Rocky Mountains. He also tinkers with cars and motorcycles. RunZhi is a native Mandarin Chinese speaker.