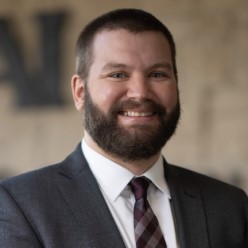 Michael Lee became a lawyer to help people. From industry-changing disasters to accidents that no one hears about, he puts everything into winning for his clients. He refuses to be outworked, putting in long hours and all-nighters to prepare every case for trial. It's Michael's approach that earns the trust and confidence of injured and grieving people after they've suffered tragedy.

Michael grew up in Southern California as the second of eight children. Michael's father was a lawyer and encouraged him to develop an interest in law and public policy at a young age. After his first year of college, Michael served on a church mission to the Dominican Republic. After seeing how different life is in the Dominican Republic, Michael's passion for helping others was bolstered even more. His time there taught him the importance of fighting for those who've been wronged.

After returning home from his mission, Michael finished his undergraduate studies and taught English in Pero. Then, he moved to Pittsburgh to study public policy and management in graduate school. During graduate school, Michael focused on economics, management theory, and computer modeling for business and public policy analysis. He also co-authored several papers on drug policy while spending a summer working at the New York City Police Department. After graduate school, Michael worked as an internal auditor for San Diego before deciding it was time to fulfill his lifelong dream of pursuing a legal career.

Michael attended law school at Washington University in St. Louis. Here, he quickly discovered a passion for litigation and made it the focus of his studies. Michael earned recognition for his oral advocacy, served as an articles editor for the Washington University Jurisprudence Review, and published a student note that discussed criminal background checks during employment. Additionally, Michael interned at the Wisconsin Attorney General's Office, where he worked with state appellate attorneys on constitutionality challenges. He furthered his experience at the Manhattan District Attorneys Office, where he produced appellate briefs as responses to defendant petitions.

Before he joined the Arnold & Itkin team, Michael worked as a trial court clerk and was employed by a small firm in Utah. Both jobs resulted in an increase in Michael's passion for helping others. Michael knows that people are frequently wronged, and he feels compelled to help them make things right whenever possible. He wants to use his familiarity with the law to be an advocate for others.

When he isn't working on a case, Michael loves to spend time with his family, listen to blues and rock music, enjoy the outdoors, and watch thrillers.