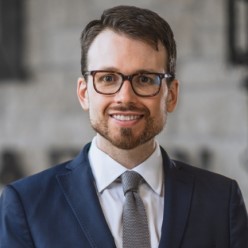 Knowing how important the jury system is for the justice of the average citizen, Michael obtained his law degree from the University of Texas School of Law. There, he competed on two traveling mock trial teams and was inducted into the Order of Barristers because of his trial-advocacy work. Michael graduated from law school with honors.

Michael bolstered his legal education by interning for the Honorable Marina Garcia Marmolejo of the United States District Court for the Southern District of Texas. He also contributed to two journals: The Texas International Law Journal and The Review of Litigation. Michael served as the Director of Development for the first and the Articles Editor for the latter. Additionally, Michael served as a research assistant to Professor Jane Cohen. During this time, he analyzed litigation over PFAS water contamination and how the United States and the European Union regulate chemicals differently. Finally, Michael published three notes, including one that appeared in the Texas Law Review.

After graduating from law school, Attorney Darling worked for a global corporate law firm that represented Fortune 500 companies during complex commercial trials. He found out how large corporations view litigation and witnessed the resources they use to try and gain an advantage during negotiations and in the courtroom. Michael saw that challenging large companies in the courtroom is the only way to get them to listen. Now, he's thrilled to be part of Arnold & Itkin.

Working at one of the nation's top plaintiff's personal injury law firm gives Michael the opportunity to fight for the justice that clients deserve, even if they're facing some of the largest companies in the world. Michael aggressively negotiates for clients and, if the other side isn't being fair, he's always ready to make them answer in court.

When Michael isn't fighting for clients or keeping up with the news, he's listening to records, practicing yoga, hiking, and watching nature documentaries.

Attorney Michael Darling of Arnold & Itkin represented a seaman who was seriously injured while working on an offshore vessel. In addition to being mistreated and called racial slurs, our client alleged that he was forced to clean the deck with dish soap, which caused him to fall and sustain a head injury. He also alleged that he was told to light a grill on the ship using an unmarked container, which blew up and burned his chest, face, and lips. Our client had to undergo surgery on his lips and his neck as a result of his injuries. Despite the defense’s attempts to downplay our client’s injuries and witnesses who claimed our client had not been mistreated, Arnold & Itkin persevered. We secured a $4.6 million settlement just days before the trial was set to begin.
Attorney's fees and expenses totaled $1,944,054.62.

Attorney Michael Darling reached a $3 million settlement on behalf of a rigger who sustained injuries to his knee and back while working on a vessel; the knee injury required a total knee replacement. Our client had been operating a tugger at the time of the incident; however, two of the four supporting bolts had been removed. Our firm is proud to have reached this result on our client’s behalf.

Settlement Won for Oilfield Worker Injured While Pinning a Derrick

Michael Darling represented an oilfield worker who was injured while pinning a derrick. At the time, the rig’s top drive engaged without warning. Our client attempted to dodge the top drive and fell more than 10 feet. As a result, he broke bones in his legs and sustained other orthopedic injuries requiring surgery. The defendants attempted several ways to limit liability. They first tried to hide behind the statute of limitations, and then they argued the company did not have enough control to allow us to bring the case forward. One week before the trial was set to start, we successfully negotiated a $3 million settlement on behalf of our client.

Attorney Michael Darling represented a plumber who received an electrical shock while drilling holes in the floor of a hotel under construction. Our client had even received a minor shock the week prior. Due to his injuries, he needed to undergo multiple surgeries—including one on his back. The company our client worked for attempted to argue that our client was to blame for not ensuring the electricity was off. They also argued that our client was covered by workers’ compensation and attempted to bar our lawsuit. Despite these challenges, we successfully reached a $2.75 million settlement.

Attorneys Cory Itkin and Michael Darling of Arnold & Itkin represented a woman who experienced traumatic injuries in a car accident that left her in need of neck and back surgery. Our team overcame the other driver’s claims that he was not to blame and disproved his lawyers’ claims that our client was exaggerating her injuries. After filing suit in Webb County, Texas, our firm fought for a settlement that would fairly compensate our client for what she endured.

$2 Million Won for Woman Injured While Loading Van for Amazon

Attorney Michael Darling recovered a $2 million settlement for a woman injured while working on loading her van to deliver Amazon packages. She was working for a third party at the time, lifting a bag full of packages below Amazon’s internal 50-pound weight limit. An Amazon supervisor came up, shouting for her to hurry, which startled our client. She twisted around, injuring her back and neck. The injuries required surgery. Our client was just months away from turning 60 at the time of the accident. We are proud to have recovered this fair settlement that will allow her to recover, move on, and enjoy her golden years.

Michael Darling represented a former truck driver injured on a cattle feedlot near Hereford, TX. Our client had been loading cattle to take to a slaughterhouse and was standing near an old concrete cattle chute. The chute crumbled and fell on him, causing severe injuries. The defendants argued that our client had decided to stand there without instruction; however, our client stated the feedlot had actually told him to stand there. They also argued that the government of Texas had signed off on all cattle chutes on the property as safe just months before the accident. Despite this, we successfully took on the case and recovered a $1.765 million settlement.

Attorneys Michael Darling and Cory Itkin represented a truck driver who experienced a life-changing injury while making a delivery at a port. As our client was talking to check in with the facility, he was hit and knocked over by a forklift. His injuries required surgery. Our firm overcame the defendant’s attempts to avoid liability and secured a $1.75 million settlement on our client’s behalf.
Attorney's fees and expenses totaled $677,471.86.

Attorneys Michael Darling and Joseph McGowan fought for justice for a truck driver who was severely injured when another trucker side-swiped his semi. Although the defense claimed that the damage was minimal and that our client had pre-existing arthritis, our client needed to have neck surgery as well as shoulder surgery to tend to his injuries. Our truck accident attorneys ultimately beat back the defense and achieved a settlement that will help take care of our client as he recovers.

Attorney Michael Darling helped an injured worker who was driving a small coupe on I-35 in San Antonio when she was sideswiped by a large commercial truck. Our client required neck surgery as a result of her injuries, but she continued working through the entire duration of her case. The defense tried to blame the accident on our client and also claimed that she had preexisting injuries, but we overcame these arguments and achieved a result that would give her the means to move on with her life.
Attorney's fees and expenses totaled $666,840.94.

Attorney Michael Darling represented a client who was injured on a land rig when a drill pipe hit him in the head. This was a complex case involving arbitration proceedings with our client’s employer, where we had to comply with New Mexico law and prove that the incident was “substantially certain to occur.” In addition to winning a $1.5 million settlement, Michael Darling secured a $1.5 million workers’ compensation lien waiver for all time for our client. This case was pending under the American Arbitration Association and settled days before trial was set to begin.
Attorney's fees and expenses totaled $736,057.01.

$1.5 Million Settlement for Trucker Rear-Ended by Another Truck Driver

Our firm represented a trucker who was seriously injured when another truck driver rear-ended his vehicle. Our client was parked on the side of the highway when the other driver struck his vehicle from behind. Attorney Michael Darling successfully overcame arguments concerning our client’s age and preexisting medical conditions, securing a settlement of $1.5 million to ensure he can get the care and support he needs.
Attorney's fees and expenses totaled $693,795.98.

Attorney Michael Darling and Roland Christensen represented a truck driver who was injured when another commercial truck driver sideswiped his vehicle. The incident caused property damage and injuries that required both a shoulder and back surgical procedure. The case was set in Memphis, TN. Before the panel entered the courtroom on the morning of jury selection, the defendants settled for $1.4 million.

Attorney Michael Darling achieved a $1 million verdict for a worker who suffered shoulder, back, neck, and head injuries when a semi struck the piece of railroad equipment he was working in while performing maintenance. The railroad crossing had insufficient signaling and no crossing arms, which the railroad tried to claim was enough. The trucking company joined the railroad in arguing that our client was actually injured in the Marines, not in the collision. Arnold & Itkin fought back to get our client the compensation he deserves to get his life back on track.
Attorney's fees and expenses totaled $546,805.35.

Attorneys Michael Darling and Cory Itkin represented a retired nurse who was injured after she slipped on liquid on the floor of a Dallas-area hotel. The fall caused her to hurt her back, requiring surgery in the aftermath. The defense attempted to raise several arguments, including that she had no proof of the liquid on the floor, that she was prone to falls, and that she was wearing Crocs at the time of the incident, which they claimed were a fall hazard. They also said that because she was retired, the case was not as valuable due to a no-lost-wage claim. Despite these arguments, we were able to reach a $750,00 settlement on her behalf.

Attorney Michael Darling represented a cooling tower repairwoman who suffered a rib fracture and other orthopedic injuries after falling while working at a large chemical plant. At the time of the incident, our client’s statement said she was injured when she fell over a stack of wood. The defendants continually pointed to that. However, she alleged that she was forced to write the statement and that she fell when a crane load hit her. Despite the numerous obstacles in the case, we were successfully able to reach a $649,375 settlement.

Attorney Michael Darling recovered $635,000 for a retired nurse who broke her femur after stepping over orange caution fencing and falling on a wooden plank. The incident occurred at the commercial building where she worked. The defendants were the construction company that left the fencing up and the building management company that allowed the entrance to remain open. Both of them argued that the hazard was open and obvious—and both of them lost. We’re proud to have achieved a favorable result for our client.