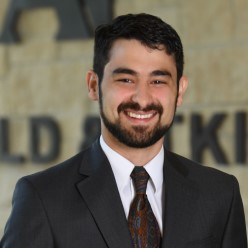 Logan Wexler was born and raised in Houston, Texas, where he attended Lamar High School. He showed ambition from a young age, playing music with touring bands and handling the business side of music for those bands as well. After high school, he enrolled at the University of Texas at San Antonio to study Spanish and Music Technology. However, his life’s trajectory shifted dramatically, and in 2016 he enrolled at the University of Texas School of Law.

At law school, Logan threw himself into the practice of law to an astonishing degree. In addition to interning for two Federal District Judges—the Hon. Melinda Harmon and the Hon. David Hittner—he participated in the Criminal Defense Clinic, the Civil Rights Clinic, and the Entrepreneurship and Community Development Clinic. These experience-based programs allowed him the unusual privilege of trying cases before he graduated law school. Logan defended numerous clients who were facing parole revocation while at the Public Defender Service for the District of Columbia. It was during his second year that Logan won a “not guilty” verdict from a Texas jury, sparing his client up to a year of jail time.

That moment was when Logan knew he needed to devote himself to trial advocacy.

After graduating, Logan served as a Public Defender in Albuquerque, New Mexico. He secured numerous acquittals and favorable verdicts for his clients, both in person and in online proceedings. But after two years, he and his wife Jenn wanted to relocate to live near family. Logan came back home to Houston. But while moving to Houston was a homecoming in many ways, it was also the beginning of a brand new journey: Logan once again changed paths, deciding to practice civil law instead of criminal law. While his opponent would no longer be the State, he recognized that the multimillion-dollar entities AI faced on a daily basis were no less formidable.

Today, Logan has taken his jury trial experience and used it to fight for the injured and grieving. As with any move, the transition from criminal law to civil law has not been easy. Still, Logan believes his core duty remains the same: fight for people from all walks of life, all of whom are facing a system that’s put that at a steep disadvantage. His job is still leveling the playing field for his clients, fighting for results that can transform their lives forever. No matter what.

Attorney Logan Wexler represented a woman and her daughter who were injured after another driver rear-ended their vehicle. They required two surgeries following the incident. The other driver claimed a sneezing fit had caused the crash—which was unavoidable and therefore not their fault. Despite these arguments, we successfully reached a resolution on behalf of our client and recovered $1.8 million on their behalf.