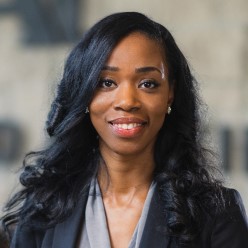 Attorney Kimberly Nwabeke was born and raised in Houston, Texas and is a proud Nigerian-American. She's always shown her potential for being a trial lawyer by being a fierce competitor in track and field as well as in the classroom. Kimberly obtained her undergraduate degree at the University of Texas at Austin. She was a student-athlete who competed on UT's Track and Field team. Her athletic and academic achievements earned her Big 12 Commission academic honors and made her a Texas letterwinner. Kimberly's time at UT resulted in an honors degree in Government.

Kimberly continued her pursuit of academics at the University of Oklahoma College of Law. There, she was involved with various advocacy competitions, ranking as the top oral advocate in her class. Kimberly also served as the president of the Black Law Students Association as well as Law Students for Africa. She was also the articles and special features editor for the American Indian Law Review. During this time, she published a comment that researched litigation options for the families of Nigerian plaintiffs killed protesting unsafe oil exploration.

Kimberly was recognized as making the OU College of Law better for everyone by being awarded the Joseph F. Rarick award. She also received the Bess Zeldich Ungerman award in recognition of being the most outstanding law student.

After law school, Kimberly was proud to use her passion for advocacy and justice as the assistant district attorney at the Harris County District Attorney's Office. During her time as a prosecutor, she sharpened her trial skills by working on cases involving DUI murder and the sexual assault of children. Kimberly felt privileged to have the chance to help people facing some of the most difficult moments of their lives.

Kimberly is thrilled to be at Arnold & Itkin because it means she'll be working with one of the nation's top plaintiff firms. Here, she can do what she's best at: being an advocate for survivors and victims. She knows that people come to Arnold & Itkin during the worst moments of her life. She's ready to use her experience to make sure these people get the compassionate and aggressive representation they need. For Kimberly, the best results matter, and she's proud to be at a firm that's known for getting them.

When she isn't helping clients, Kimberly spends time with her husband Jeff and their son Caleb. She takes every opportunity to root for her Longhorns—even when they're facing OU in the Red River Rivalry! Kimberly also loves supporting all Houston sports teams.