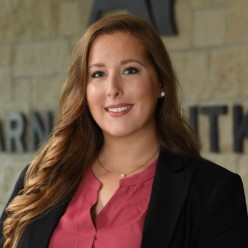 Attorney Kelsey Stallings was born and raised in Clear Lake, Texas. However, she spent a significant portion of her childhood traveling the world with her parents on service trips. Kelsey was exposed to many cultures and traditions during this time, instilling a strong sense of empathy and sensitivity.

Kelsey earned undergraduate degrees in political science and history at Chapman University in Orange, California. She then returned to a familiar way of life by going on a multi-year service program with a human rights nonprofit in Manila, Philippines. During this time, Kelsey was thrilled that her work allowed her to help right the wrongs inflicted on regular people.

After her time in the Philippines, Kelsey returned to the United States and started studying law at the University of Houston Law Center. As she worked toward her law degree, Kelsey started working as a clerk at Arnold & Itkin. She also clerked for the Honorable Nancy Johnson in the Southern District of Texas.

After earning her law degree, Kelsey started work at a private firm as a defense attorney. During this time, she worked on cases involving wrongful death, construction accidents, and Jones Act claims. She earned a reputation early in her career after earning multiple favorable results in a short amount of time. While Kelsey was building her reputation as a formidable litigator, she retained her desire to make a difference for others.

In 2021, Kelsey decided to change the path of her career so it can involve helping others. She returned to Arnold & Itkin. She’s thrilled to be working at the firm she gained experience at during her law school days. Each day, Kelsey is honored to be an advocate for people who are facing some of the most difficult times of their lives. She uses her strong sense of empathy to be their guide, never backing down from a fight when cases get tough.

When she isn’t working on getting results for clients, Kelsey can be found outdoors with her husband Connor and her black Labrador Scout.