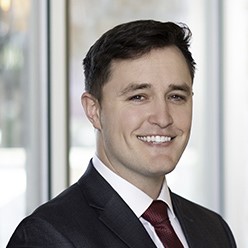 Attorney Jake Balser of Arnold & Itkin works tirelessly to represent clients in personal injury cases throughout the U.S., including complex maritime cases. He knows that offshore workers deserve a voice after suffering, and he's proud to help them find one.

Jake Balser was born in Provo, Utah and is the second of six children. Jake excelled from a young age in various areas, including football, baseball, soccer, and in the classroom. After graduating high school, Jake decided to serve as an LDS missionary, turning down multiple offers for academic and athletic scholarships. He served for two years in eastern Ukraine, where he learned to speak Russian

Once Jake came back from his mission, he enrolled at Brigham Young University as a Russian Studies major. He eventually returned east to Moscow, where he interned for a human rights organization and an NGO advocating for more government transparency and fewer nuclear weapons. Here, he witnessed how the law can hold powerful entities accountable and giver regular people a voice. That's when Jake decided that he wanted to study law.

Jake enrolled in law school at Georgetown University shortly after returning from Moscow. While attending Georgetown, Jake interned at the U.S. District Court for the District of Utah for the Honorable Robert J. Shelby and was an online development editor for The American Criminal Law Review.

During his second year of law school, Jake began working as a law clerk for Arnold & Itkin. He was immediately impressed with the passion, integrity, and determination Arnold & Itkin had for helping offshore workers who had been injured by others' careless actions. Jake was proud to continue working for Arnold & Itkin as a maritime attorney after being admitted to the Texas Bar in November 2018. Jake is dedicated to fighting for the rights of people injured offshore, no matter how difficult the challenge. He knows that people come to him when they need help the most, and he works tirelessly to make sure they receive it.

In his spare time, Jake enjoys taking trips with his wife and daughter, reading Louis L'Amour, playing sports, and listening to his growing record collection. Jake and his family currently reside in Houston.